HOW TO GROW DENDROBIUM ORCHIDS 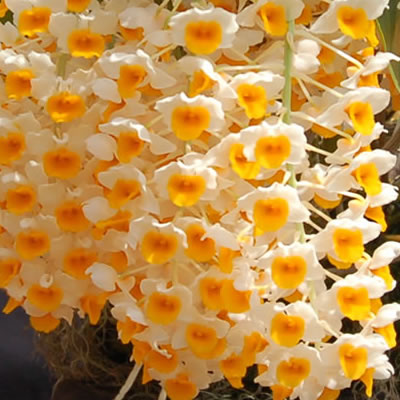 An introduction to Dendrobium orchid culture...

Dendrobiums come from South East Asia in an area that stretches from Northern India to the islands off the East coast of New Guinea and Australia to Polynesia.

The latitude where they grow is important.

The Equator runs through the middle of this territory and here it is always hot at sea level without any seasonal variation.

DENDROBIUM. There are over a thousand known species of Dendrobium (pronounced den-dro-bee-urn), the image at above is that of dendrobium thrysiflorum, a native of Thailand and the Himalayas, which can grow into a massive plant bearing many hundreds of blooms; still more are being discovered in the highlands of New Guinea. This makes them the second largest orchid genus in the world after Bulbophyllum.

The shape and form of their stems and leaves vary tremendously, but the pattern of flowers is fairly constant ranging in size from very small to huge. Typically the bases of the sepals are fused to the foot of the column and the lip base forming a mentum or 'chin' which often houses nectar. 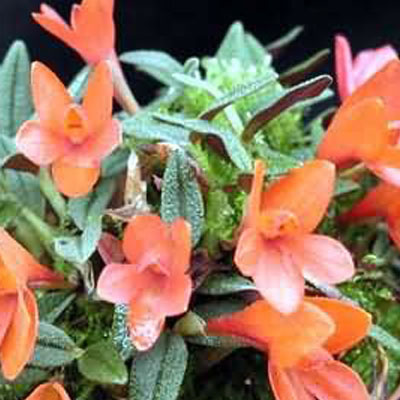 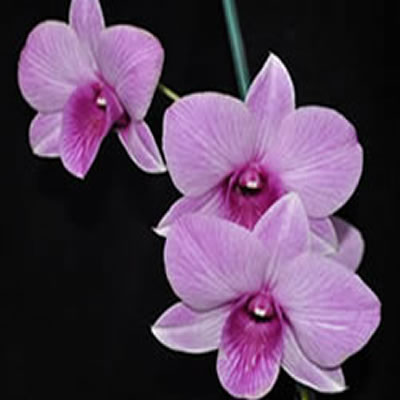 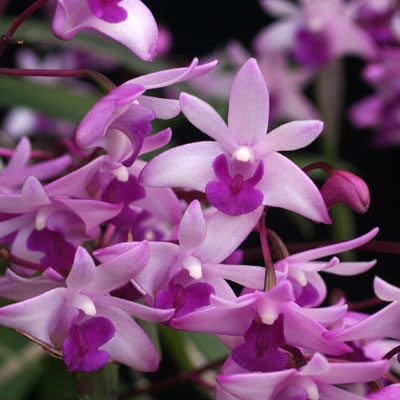 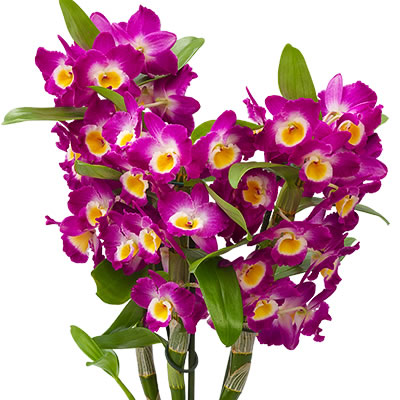 How to Grow Dendrobium Orchids

New Guinea Dendrobiums. The climate varies with altitude and in mountainous areas there are cool, wet misty nights and mornings followed by warmer bright days. The exquisite cool and intermediate miniatures like D. cuthbertsonii shown above; (which requires cooler conditions with temperatures dropping as low as 45 deg F at night.) Perhaps not such an easy orchid for beginners. Never allow them to dry out completely and feed often with dilute fertilizer. The river valleys between the mountain ranges are warmer and wetter, and home to some of the most exotic of the New Guinea orchids, e.g. D. lasianthera from the Sepik River basin, and many Latouria types with long-lasting flowers. All these need generous feeding and watering. The southern plains resemble Queensland but are wetter and very warm all year through. There is seasonal rainfall variation with a wetter summer and drier winter.

Two of the outstanding species from this area (which are also found in Australia) are D. bigibbum (better know perhaps for its many hybrids which collectively are dendrobium. phalaenopsis) and D. canaliculatum, the former often found growing on rocks, the latter on the trunks of paperbark trees. The easiest New Guinea plants for beginners are Dendrobium oberrans (cool conditions); D. lawesii or D. antennatum (intermediate); and D. atroviolaceorn or D. bigibbum (D. phalaenopsis) (warm)..

Cool culture. Night time temperatures as low as 45/50 degrees F  will be tolerated by the cooler growing species, cuthbertsonii for instance; when it is cold avoid over watering, but do not let the dry out totally.
Warm Culture. Treat the warmer ones as you would phalaenopsis see our page on phalaenopsis culture

Phalaenopsis dendrobiums (Singapore Orchids) and Antelope dendrobiums Phalaneopsis dendrobium flowers have can be found in a multitude of colours and stripes, anterlope dendrobiums have twisted petals giving them the appearance of having little antelope horns.
Temperature and Humidity temperature range is 50 to 90 F, this is ideal, but the odd cooler night by a degree or two will not cause any damage with a humidity of 50 to 60 percent during the daytime.
As with all orchids avoid wetting the leaves when the temperature falls, i.e. over night, If in a greenhouse good air movement is essential. Light 30- to 70-percent shade during midday.
Bright light will generally encourage flowering, but take care not to get the leaves burned.

Watering water very well, pour the water through and leave to drain allow the plant to dry before watering again. In summer twice a week at most In winter perhaps once every 10 days, unless in a warm environment. Nutrition Feed with every other watering at half the recommended dilution rate. This will guarantee adequate nutrition while avoiding any chance of root-tip.

Australian Dendrobiums .
Dendrobium Kingianum or near relatives are the some of the easiest to grow. The pseudobulbs or canes can be any length from 5cm. to 30cm. tall and are thin, and often spindly and tough. The leaves are narrowly oval with 2 to 4 at the top of each cane. The flowers appear in late winter and early spring in loose sprays at the tops of the canes on both the old and new canes. New plantlets or keikis may sometimes appear instead. These can be removed and potted separately after they have developed good roots or left on the parent plant where they will eventually flower also. There are two to ten flowers on a spray, each measuring 1- 3 cm. across, in shades of pink or purple. Other plants in this group may be taller and have red, yellow, cream or white flowers.
Culture. For their culture give intermediate temperatures and drier conditions than other Dendrobiums. Spray once a week and water generously in the spring and autumn with dilute feed. A few cold weeks in winter (down to 45°F), will encourage flowering.

Nobile Dendrobiums. Nobile Dendrobiums. Are some of the easiest to grow but can be a little difficult to bloom regularly. Their flowers are showy with colours ranging from white through pink to purple, and the lip is often beautifully marked in contrasting colours. They make magnificent specimen plants. Others are yellow and brown, while the recently introduced Yamamoto hybrids have all the colours of the rainbow. The Himalayan climate is not unlike a warmer Switzerland, with bright, cold but dry winters. Culture. November-February: daytime temperatures can drop to 40 to 45 degrees F  when you should not water or feed but give plenty of light and air movement. March-May or June: warmer and moister conditions. Buds develop and new growths appear. Water sparingly until the new shoots have grown good roots. From June-November corresponds to the monsoon period, warm and very wet. Give a low strength, high nitrogen feed in April and May, then feed weekly during maximum growth. Change to high potash for the last month. Note If you do not dry and cool the plants during winter, you won't get flowers! Himalayan Dendrobiums from lower altitudes need a less harsh winter but still dry.

Culture. November-February: daytime temperatures can drop to 40° - 45° when you should not water or feed but give plenty of light and air movement. March-May or June: warmer and moister conditions. Buds develop and new growths appear. Water sparingly until the new shoots have grown good roots. From June-November corresponds to the monsoon period, warm and very wet. Give a low strength, high nitrogen feed in April and May, then feed weekly during maximum growth. Change to high potash for the last month.
Note If you do not dry and cool the plants during winter, you won't get flowers!
Himalayan Dendrobiums from lower altitudes need a less harsh winter but still dry.

Potting (all dendrobium types). Dendrobiums like to be in small pots with their roots confined. Bark, perlag and charcoal make up an open mix which drains easily. Repot when either the compost becomes acid and soggy or when the pot is full of roots. This often means every year.
Plants from the mountains of New Guinea like a little moss mixed with the bark or they can be grown on slabs of bark or tree fern on a mossy bed. Such slabs need daily misting for most of the year.
There are innumerable Dendrobium hybrids and these are almost always derived from species within one group, either Himalayan, Australian or from New Guinea. Surprisingly, most of the 'Singapore' orchids, although developed there, are derived from species of New Guinea and the adjacent islands and need much the same culture as the River Valley New Guinea species. So, when you buy a Dendrobium, ask which group it belongs to and where it comes from - and we don't mean which nursery!